More Clues From the Great Recession: How Will COVID-19 Affect Community College Funding? 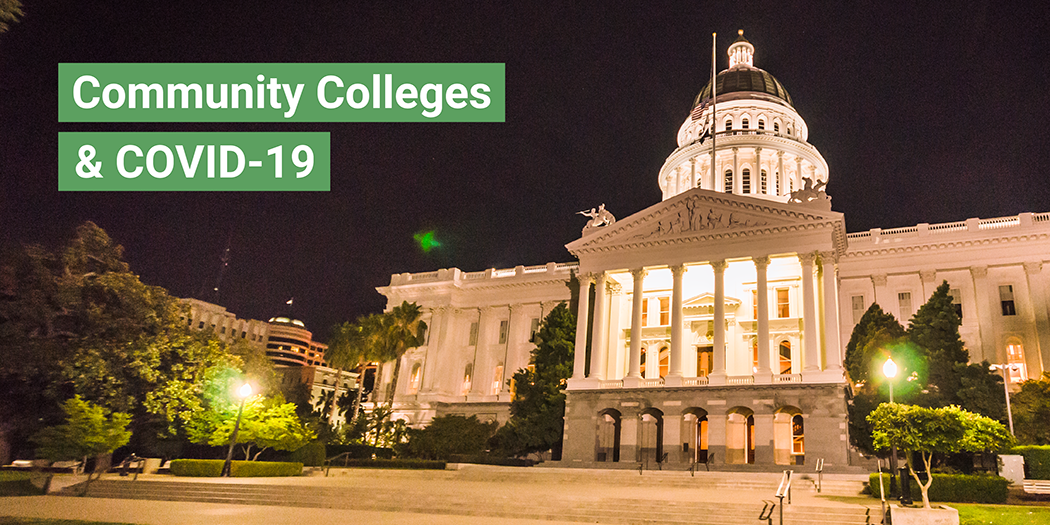 The Great Recession brought many more students—and more state budget cuts—to community colleges. College leaders turned to tuition and fees, federal stimulus, and other revenue sources to partially make up for these state funding shortfalls. But the magnitude of the shocks caused by COVID-19 suggests that colleges may experience even steeper and more rapid cuts in state funding and be less able to draw on tuition and other revenue sources as a backup this time around.

To consider how the unfolding economic crisis might affect community college funding, we examine historical data from IPEDS on trends in college revenue, which we group into four categories: state funding; revenue from tuition and fees; funding from local taxes; and revenue from “other” sources (e.g., grant funding, auxiliary services). Our list of community colleges corrects for the mismatch between the IPEDS “public two-year colleges” designation and community colleges as they are defined by state policymakers and colleges themselves. We report national trends in community college revenue and enrollment, and we include a data tool at the end of the post that allows users to examine revenue trends for specific states or colleges. 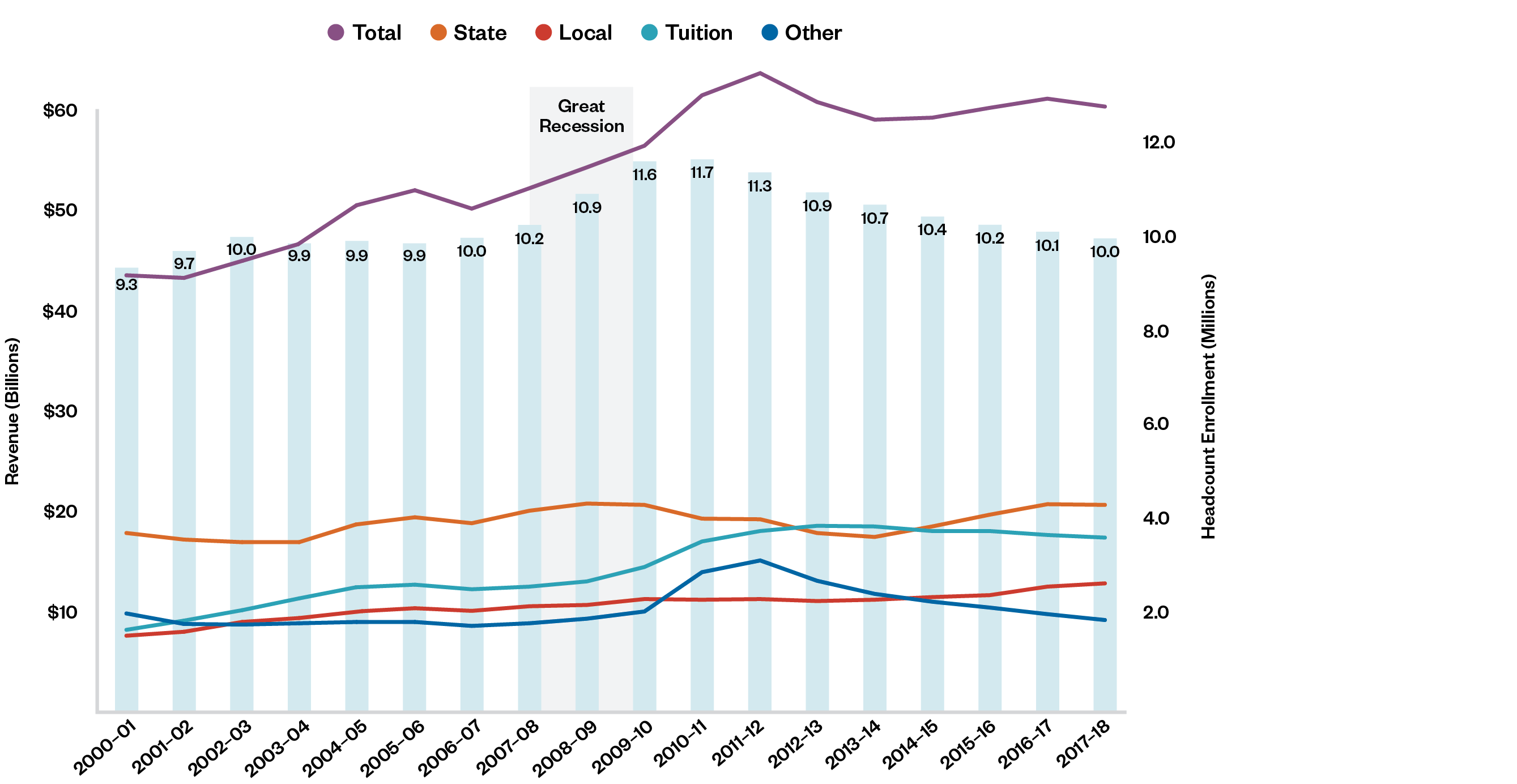 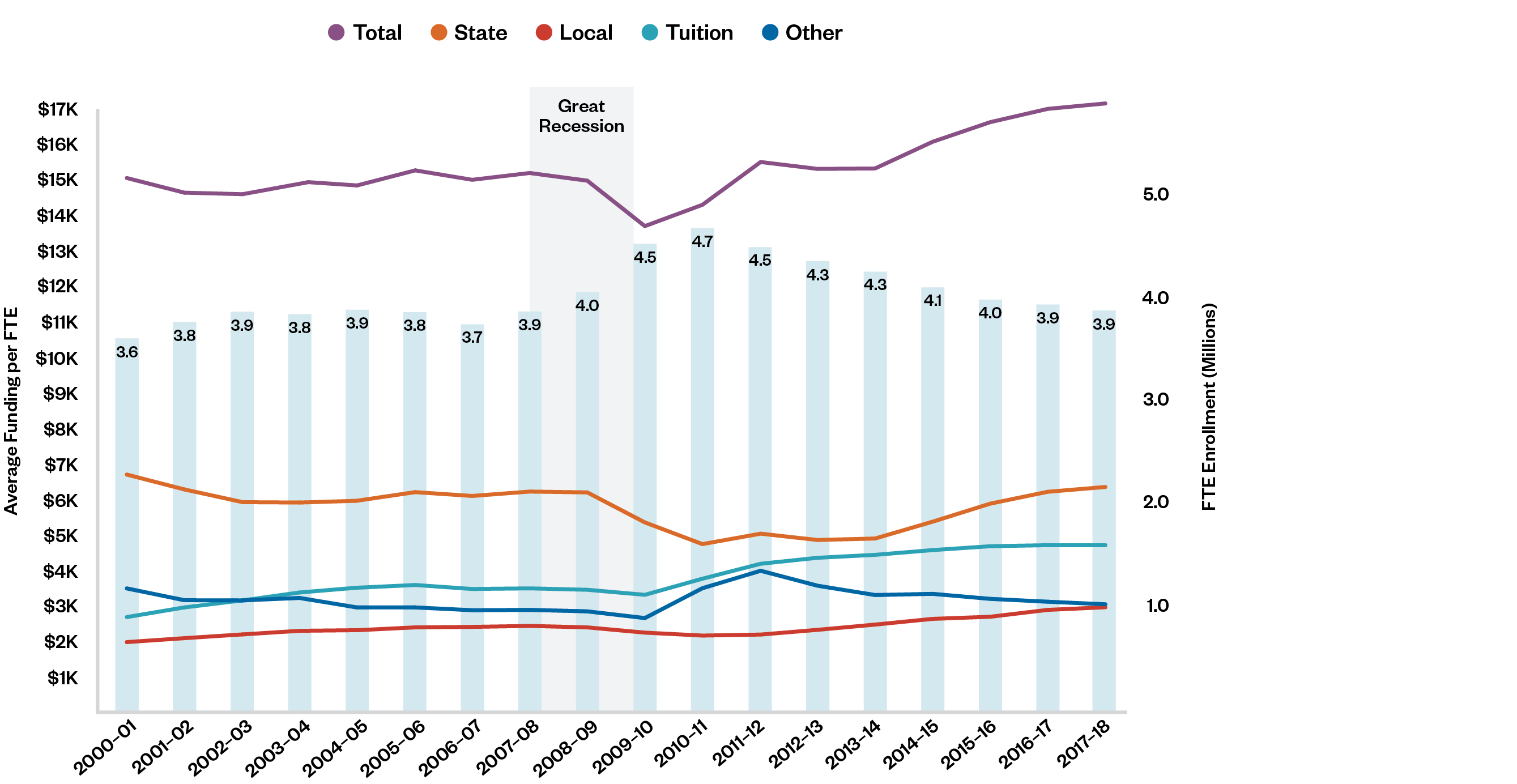 The outlook for state funding looks worse this time.

Colleges should prepare for state funding to be cut much more quickly—and more sharply—as a result of COVID-19. Total state funding for community colleges actually increased at the outset of the Great Recession, peaking at $21 billion during 2008–09 before dipping for a few years and then gradually rebounding. State funding per student declined somewhat during the recession due to increased enrollment, but it decreased more steeply post-recession. State funding accounted for 39% of revenue per student in 2008–09, declined to 29% in 2012–13, and then gradually reached 34% in 2017–18, the most recent year available. That left it below the pre-Great Recession level of around 38%.

To recoup losses from state funding following the Great Recession, community colleges turned to tuition, fees, and other revenue. Colleges may be less able to rely on these sources this time.

Revenue from tuition and fees increased during and after the Great Recession, no doubt due in part to the spike in community college enrollments. But per-student tuition revenue also rose, meaning community colleges charged students more in the wake of the recession, presumably to help make up for cuts in state funding. In 2008–09, community colleges brought in about $3,500 per student in tuition and fees. This increased to $4,200 in 2011–12. During that same period, the average state funding per student dropped from $6,200 to $5,100.

Within the COVID-19 context, there are at least two reasons why community colleges may be less able to draw on tuition and fee revenue to make up for state cuts. First, average community college tuition and fees, while still relatively affordable, are currently at their highest point on record. Since the outset of the Great Recession, average revenues from tuition and fees are up more than $1,000 per student, topping $4,700 in 2017–18. In all likelihood, college leaders and policymakers will be reluctant to shift the cost burden to students via increases in tuition and fees during the current crisis. Rising college costs and mounting student debt were growing concerns before the pandemic, and raising tuition further seems untenable during a time of record unemployment and widely shared economic pain.

Second, increasing tuition revenue through increased enrollment may not be as likely now since, as we argued in a previous post, there is no guarantee that overall enrollments will increase as sharply as they did after 2008. After peaking around 2010, overall postsecondary enrollments decreased 7% between 2010 and 2017, and federal projections—based largely on an aging population and other demographic trends—assume little growth through 2028, particularly for community colleges. While past recessions resulted in increased college enrollments, we do not know how people will respond this time. The massive and sudden job losses brought about by the pandemic have created an unstable and even dire financial reality for many Americans. Many unemployed or low-wage workers that would benefit from seeking additional training or pursuing a college degree will not be able to do so without additional support.

Local tax revenue may provide a modest buffer for some community colleges.

Local tax-based funding provided a buffer for some community colleges against declines in state funding and tuition revenue after the Great Recession, and it will likely play a similar role during the COVID-19 recession. However, local funding varies widely across—and even within—states. Local funding accounts for less than 12% of total revenues at half of community colleges nationally, including 10% that receive no local funds at all. Even for colleges that do have local funding, the amount is unlikely to increase in the short run, especially if local governments experience drops in property taxes and other revenue.

Will community colleges have funding to support a post-COVID-19 recovery?

In response to the Great Recession, community colleges enrolled well over a million more students, many of them displaced workers seeking retraining. The retraining provided by community colleges, combined with their continued efforts to offer a low-cost, accessible path to college degrees, almost certainly contributed to the job growth and low unemployment the United States has enjoyed in the past decade. In the midst of the COVID-19 pandemic and afterward, state funding cuts are likely to be far greater, and colleges will be less able to recoup losses through tuition and other sources.

Community colleges can and should play a central role in the nation’s economic recovery post-COVID-19. They have risen to the challenge in the past, but will require additional federal investment to meet the challenges posed by the COVID-19 recession.

Revenue trends in your state and college

Because community college funding mechanisms differ across and within states, the amounts and sources of any funding reductions will vary by state and college. This tool allows users to examine trends in community college revenue by source for individual colleges, by state, and for the United States overall. To download the data from each graph, click on either axis in the graph you are interested in and then click the button at the bottom of the dashboard with the down arrow. Next, click “data” in the pop-up window, and the summary (data in the chart) or full data (institution level, from IPEDS) can be downloaded as a text file (which can be opened and saved in Excel).