One of the main takeaways from our work with our partners at the National Student Clearinghouse Research Center, the Aspen Institute, and Public Agenda is that the pathways transfer students follow are often long and complicated. This is true even for students who succeed in completing a bachelor’s degree. Simply examining the sequences of enrollments at different types of colleges in the six years after students entered college demonstrates the complexity of transfer student pathways.

In fact, as the slide shows, only 8% of bachelor’s degree graduates who started at a community college in 2007 followed the 2 + 2 pattern. When students were tracked over six years, 2 + 3, 3 + 3, and 2 + 4 patterns were slightly more common, though no one pattern applied to a majority of transfer students. Interestingly, about one in five students “stopped out” for a year or more, reenrolled, and subsequently completed a bachelor’s. 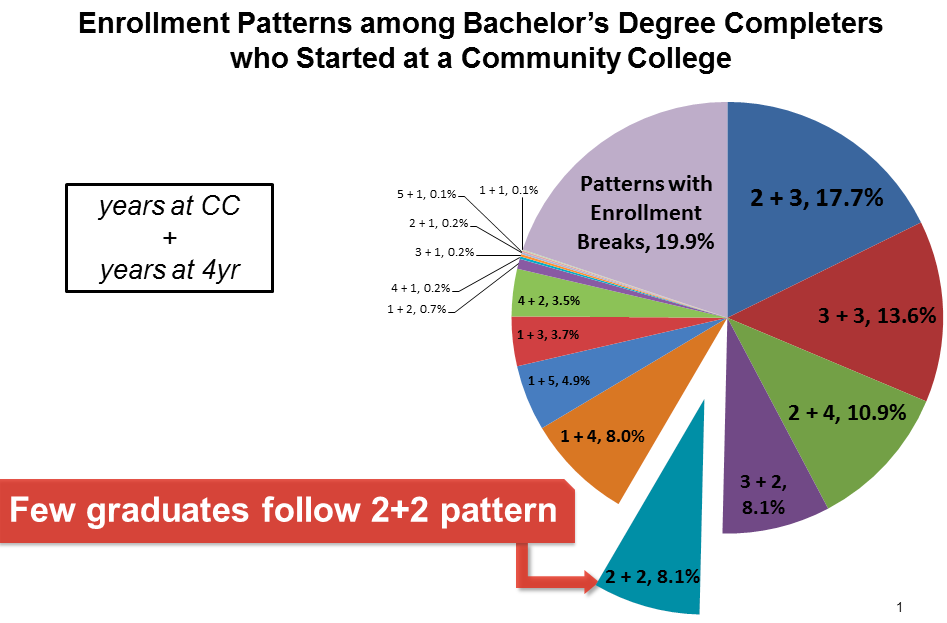 Note. Percentages based on National Student Clearinghouse data on students who completed a bachelor’s degree within six years of entering a community college in the fall of 2007. See Jenkins and Fink (2016) for more information on data and definitions. Sequences were derived using term-by-term enrollment data on whether students were enrolled at a two-year college, enrolled at a four-year college, or not enrolled. We collapsed term-by-term data into year-by-year results using students’ highest institution attended for each year. For example, a student’s second year would be categorized as 'four-year college' if during their second year that student enrolled at a two-year institution in the fall, transferred mid-year, and enrolled at a four-year institution in the spring.

The interactive tool below allows us to slice up the data even more finely and follow different student transfer paths. It shows the various sequences of college enrollment followed by the roughly 100,000 students in our dataset who started at a community college in fall 2007, transferred, and completed a bachelor’s degree within six years. Hover over the chart to explore the myriad enrollment sequences transfer students followed.

Enrollment Patterns Among Transfer Students Who Earned a Bachelor's in Six Years (N = 99,727)


of transfer students who completed a bachelor's degree followed this sequence

John Fink is a senior research associate at the Community College Research Center.