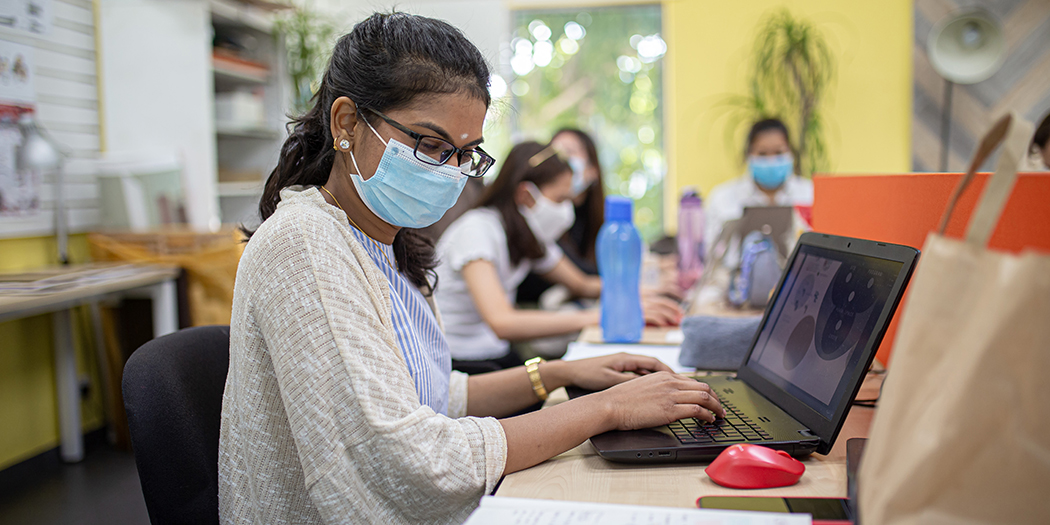 By Clive Belfield and Thomas Brock

As the 2021–22 academic year unfolds, we can investigate how things differ from last year. Is the level of disruption similar, and is it happening in the same ways? For our year-to-year comparison, we use a U.S. Census Bureau program that has been surveying households every two weeks since July 2020. We use data on over 50,000 respondents from the August-September waves in 2020 and again in 2021.

We can summarize the changes to the start of this academic year compared to the disruptions of the last academic year in a simple phrase: “half as much.” The disruptions from 2020–21 are happening to about half as many students in 2021–22. (We do not know if the disruptions are socially optimal; it may be that more disruption is necessary to bring the pandemic under control. So, in describing the changes to the postsecondary conditions for students, we can say they are “half the size” but not necessarily “half as bad.”)

The figure below shows how community college students responded to the pandemic at the start of each academic year (August 2020–21 in blue; August 2021–22 in red). Class cancellations were very high in August 2020. By August 2021 they had fallen by half, although that still meant one in five students had classes canceled. Similarly, one in 10 community college students are taking fewer classed in 2021–22—still significant, but a big improvement over last year.

The second figure shows the reasons community college students’ plans changed. Here, too, we see how the pandemic has become “half-as-much.” In August 2020, over one third of students reported that virus contagion was an important reason they changed their plans; by the following year, one sixth reported this as important. Similarly, other important factors affecting plans for community college—changes to instructional format, affordability, and financial aid—were reported by half as many students for the 2021–22 academic year.

As it has spread, the pandemic has not affected all students equally. In August 2020, cancellations—as well as problems with college affordability—were especially significant for single parents, Black and Hispanic students, and low-income students. These rates are shown (in blue) in the figure below. Also shown (in red) are the comparable estimates for August 2021.

Lack of affordability—that is, the inability to invest in college caused by lost jobs, lower incomes, and economic uncertainty—has been a decisive factor for community college students during the pandemic. New survey results on student experiences at the start of the pandemic reinforce this conclusion. For this evidence, we draw on newly published tables from the National Postsecondary Student Aid Study (NPSAS:20) from the National Center for Education Statistics. This study relies on responses from over 60,000 undergraduates, and frequencies are weighted to represent the college-going population nationwide as of spring 2020.

As the pandemic first hit in March 2020, community colleges responded with various strategies to ensure college education could continue. Students reported that their community colleges provided helpful communication about how the pandemic would impact their access to courses (69%), degree program progress (56%), and financial aid (49%), as well as physical and mental health (37%). Also, to help students move to online instruction, one third of students reported receiving technology services from their community college. Importantly, these communication strategies and technology services were provided at rates almost equivalent to the rates for students at four-year colleges.

The story is different for immediate financial support. As the pandemic started, community colleges provided financial support to some students: One in 10 students reported receiving emergency financial assistance from their college, and one quarter reported receiving a tuition refund during the semester. However, these rates were substantially lower than those for four-year students: Almost a quarter of four-year students received emergency financial assistance, and almost one third received tuition refunds. Community colleges were unable to match four-year colleges, possibly because CARES Act funding was initially based on full-time enrollments, placing community colleges—with their large numbers of part-time students—at a disadvantage relative to four-year institutions. (Congress fixed this problem in the second wave of CARES funding.) Some four-year colleges and universities may also have had a greater ability to draw on institutional resources and private donations to address emergency financial needs than the typical community college.

Even with everyone’s desire to return to normal, the pandemic is still being felt by community college students. This academic year appears to be less disrupted than last year, which is a positive trend. But there is still a significant amount of disruption, and it is felt most by economically disadvantaged students. Over these two academic years, the pandemic has resulted in the average student losing approximately three quarters of a year of community college. When the pandemic finally wanes, redressing this postsecondary deficit will be critical. Moreover, much of this loss is due to problems with college affordability (rather than the virus itself). We see this in the large gaps between low-income and high-income students and in the differences in financial support for community college students and for those in four-year colleges. As the nation rebounds, making college affordable for all must be a priority.

Clive Belfield is a professor of economics at Queens College, CUNY, and a CCRC research fellow. Thomas Brock is the director of CCRC.