Reflecting on 25 Years of CCRC 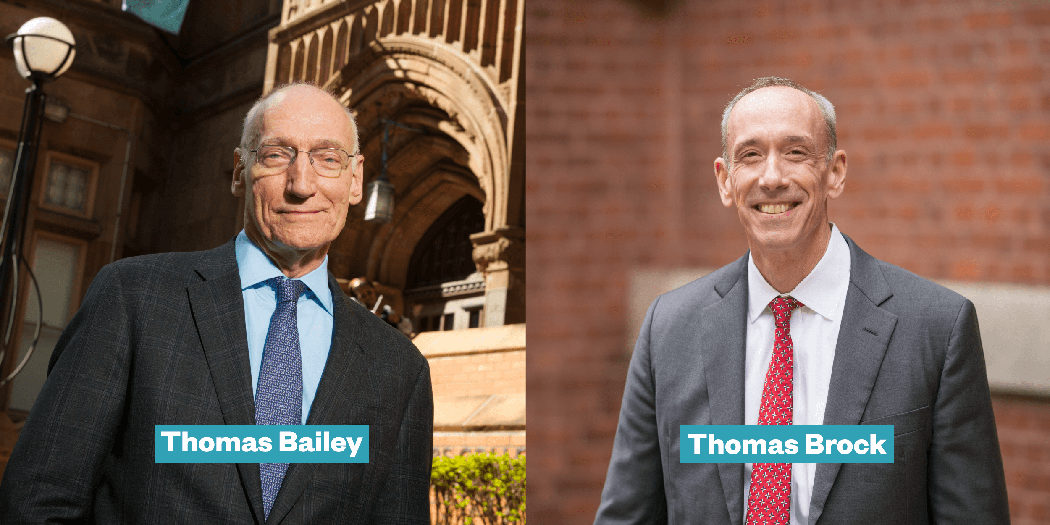 Over the last 25 years, the Community College Research Center evolved from one project among many to a trusted source of knowledge on the nation’s open-access two-year institutions. To mark our 25th anniversary, our founding director, Tom Bailey—who is now the president of Teachers College—sat down with our current director, Tom Brock, to reflect on the center’s growth and consider the next phase of our work.

This Q&A was condensed and edited.

Elizabeth Ganga: When you first started, did you imagine CCRC would be around to celebrate its 25th anniversary?

Thomas Bailey: No. At the time it was just one project among others. It was like any grant—you work on it and hope it leads to something else.

I was not pursuing a study of community colleges. I’ve always given Jesse Ausubel at the Sloan Foundation—the original funder of CCRC—the credit for his insight into the role that these colleges played, and the irony that they don’t attract that much attention. Though, they attract so much more attention now than they did when CCRC began.

The first CCRC research brief was based on a paper I wrote with Irina Averianova on the multiple missions of community colleges. It laid out this argument that some people thought the colleges were great because they served the community. And then there were people who said they were abandoning the underlying equity mission of getting people to a BA.

Basically, it ended by saying people make these arguments, but they don’t use any data. There are a lot of “shoulds” or “coulds” or “ought-to-bes” in these papers. We made the argument that there’s no coherent plan about how all the roles of the college might fit together. Given that, it’s hard to think of the colleges doing it in an optimal way. So we need more research.

Ganga: When did you first become aware of CCRC?

Thomas Brock: I started out in the social welfare field, largely focused on welfare reform, and was at MDRC. We became increasingly interested in approaches that would put more emphasis on education and training and skills building as a way to improve the economic prospects of welfare recipients and former recipients. To understand anything at all about the field and the sector, CCRC was really the only source at the time.

MDRC and CCRC ended up working together on Achieving the Dream. We also went in together on—I shouldn’t say it was the first, it was the first in a while—a federal R&D center focused on postsecondary education, which was called the National Center for Postsecondary Research (NCPR). We put in a proposal that community colleges should be the focus, that the dev ed challenge in particular would be the target of our work. And that got funded.

Bailey: The thinking about community colleges really changed in the first part of this century. I’d like to think that we helped that. But I think primarily we were lucky. We were already doing it, so this wave comes along, and we were there.

Brock: I think there were two big events in the early 2000s that changed the thinking. One was, along with CCRC, the Department of Education finally started coming out with longitudinal data to show how community college students fare over time, namely the Beginning Postsecondary Students Longitudinal Survey. And that really shocked the field because it demonstrated that the great majority of students who started at community college went nowhere. And that really flew in the face of all the thinking at the time, that these institutions provided these ladders to upward mobility and that they did such a great job with transfer. It just shot it down. The other thing, then, was Lumina Foundation just got established. And they decided to focus almost entirely, if not entirely, on community colleges and look for ways that they could invest and support improvement in this sector.

Ganga: Looking back, what do you see as CCRC’s biggest contributions?

Bailey: The work we did with NCPR showed that, looked at in isolation, these interventions didn’t work. That was a really important conclusion. It’s not an inoculation—you don’t just give them a learning community for a semester, and they just trot off into the sunset having solved their problems.

And we did the research in a rigorous way. These were well-done studies, and they were all discouraging. That ultimately led to the idea that what was needed was institutional transformation. Obviously, that led to guided pathways.

Brock: I agree with what Tom said, but I would flag two things in particular. One, the work CCRC did on developmental education was transformative for the field. Again, everyone assumed dev ed worked. Everyone assumed it was the right thing to do for struggling students. All the intentions around dev ed were good. And it really wasn’t until your work showed that students got stuck in these long sequences and that very few students went on to earn degrees that people began to question that model. And, as with much of CCRC’s work, at the time you came out with that news, it wasn’t particularly well received. A lot of people in the field did not want to hear that message. But now, 10 or more years later, I don’t think anyone disputes the idea that the traditional approach to dev ed does not work for the vast majority of students. So that was critical.

And I want to put an exclamation point by guided pathways. There was a sea change in people’s thinking from believing that individual interventions were the way to make meaningful improvements in student outcomes to thinking about institutional reform and the importance of a college’s organization for student success. We don’t yet have the definitive data to show that guided pathways is really the answer, but I think it’s been an important and necessary shift for the field.

One of the important roles of a research center like CCRC is to have the courage to stand up and say when things don’t work and to have credibility so that people will take you seriously. I think CCRC has really been important in standing up at key moments to say, “This isn’t enough. We need to try a different tack.”

Bailey: I think that we were able to develop relationships with the community college community, so people trusted us. For the most part, when we criticized, or we said, “This isn’t working,” people didn’t say, “Oh, that’s a bunch of snooty academics off at Columbia. They have no clue about these kinds of students we’re working with.” We spent a lot of time at colleges and talking to people. We were able to gain their trust.

Ganga: How do you see our work evolving in the next five or 10 years?

Brock: A lot of it is building on this history. Guided pathways will continue to be at the center of our work. But we are broadening that notion as well. Guided pathways started as an ambitious institutional reform model. Increasingly, we are coming to understand community colleges as part of larger systems. So how do we help community colleges reach down to K-12 schools so that there are clearer pathways from secondary schools into postsecondary?

Second, we’re thinking about community colleges as part of a higher ed ecosystem. We know many students take courses at several institutions, and some students transfer, either to other community colleges or to four-year institutions. But how do we make that work for those students? How do we get them on and keep them on a path, to use Davis Jenkins’s phrase? Right now, institutions are not set up to help students easily view or transfer credits. They’re not set up to keep students moving upward, particularly toward larger career goals. So there’s just much more that needs to be done, and I see CCRC as being at the center of those conversations and part of developing and testing strategies to do that more effectively.

Tags:
Thomas Brock Thomas Bailey
Prior Learning Assessment: A Key Piece of the Cred...
What HBCUs Can Teach Us About Culturally Sustainin...