Why Martha Kanter Says Free College Is About More Than Money 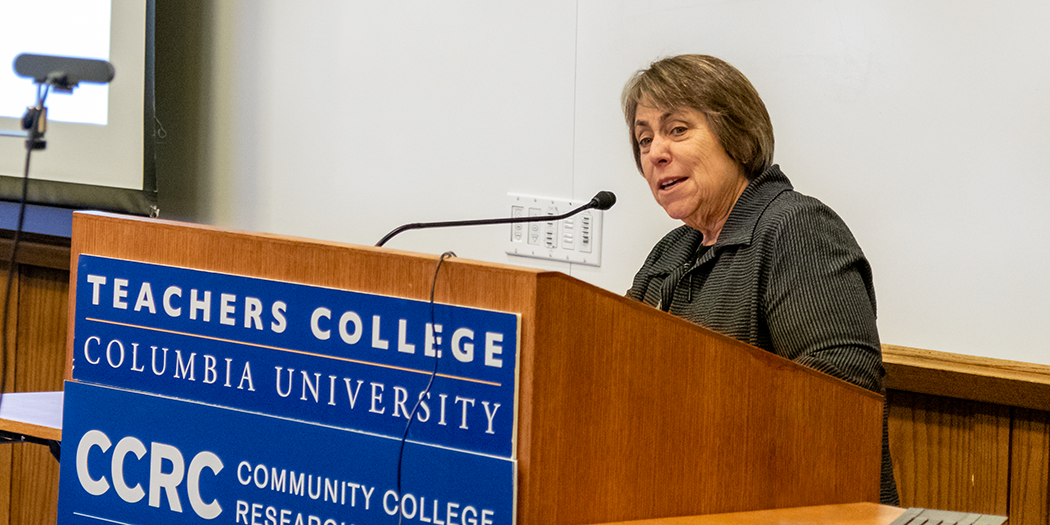 Hundreds of cities and small towns across the country have proven that free college is not a fantasy, and as the nonpartisan College Promise Campaign continues its march to make at least the first two years of college free for every American, financial sustainability and research-backed solutions are top of mind for Executive Director Martha Kanter.

Since President Barack Obama launched the College Promise Campaign in September 2015, the movement has spread to more than 330 communities in 47 states, making postsecondary education possible for students who would have otherwise been left out. During a February talk organized by CCRC and the Teachers College Higher Education program, Kanter, who served as Obama’s under secretary of education from 2009-2013, described College Promise’s progress and what its next phase will look like, emphasizing the need to implement evidence-based practices, transcend politics, and live up to the campaign’s name.

However, historic precedent cuts both ways, and successful federally and state-funded free college programs are hardly a contemporary invention. During her talk, Kanter noted that the bipartisan GI Bill provided free postsecondary education to returning World War II veterans, and several colleges across the country—from the City University of New York to the University of California—waived tuition until the back-half of the 20th century.

And so, despite criticisms that free college programs merely transfer costs from students to communities and reduce student accountability, Kanter noted that College Promise is simply a “reinvention” of a policy that “this country valued for many, many decades.”

“‘Free’ brings people to the table that don’t think higher education is possible,” Kanter said. “It draws people into a future that is opportunity-focused. … Too many families, too many kids, too many adults just don’t think it’s possible.”

The promise programs that have cropped up across the country have leveraged federal and state dollars, philanthropic support, and funds from the private sector to give those people a seat at the table. And, though the programs the campaign considers “promises” have commonalities, they vary significantly in terms of funding sources and models. Some, like the statewide Rhode Island Promise, are “last dollar” scholarships, meaning they fill in the tuition gap after other aid sources like the Pell Grant are applied. Others, including the Kalamazoo Promise, operate on a “first dollar” basis and cover tuition before students use up other funds. Regardless of the setup, Kanter said, it is important that the programs aren’t just a flash in the pan. They must be designed to last.

“We have to figure out ways to actually maximize the dollars that are there,” Kanter said. “But the dollars are only one part of it. It really is the leadership to say, ‘Okay, if we’re going to do something like this, how is it not going to be just a drop in the bucket and disappear?’”

While leadership is essential, Kanter insists that free college remain a nonpartisan issue, and promise programs have sprung up in ruby red and deep blue states alike. The conversation is currently on the front burners for Republican and Democratic governors in 29 states, many of whom are particularly focused on increasing access to college for families who make below the state’s median annual wage.

Moving forward, Kanter said the College Promise Campaign is focused on ensuring promise programs are financially sustainable and promoting research-backed practices that boost outcomes for students across the socioeconomic spectrum. She wants new promise initiatives to design their programs based on research that examines how to effectively launch students into college and then support them throughout, pointing to CCRC’s research on guided pathways, developmental education, and advising and student supports as providing an evidence base for the work.

“While we’re at the highest graduation rate this country has ever had—81% I believe is the latest figure I saw—but when you look at the gaps, the gaps haven’t narrowed if you disaggregate by racial groups,” Kanter said. “So we have not made enough progress. And we have to really figure out what are the solutions.”

As the movement matures, the campaign is taking a hard look at which program features are working and which aren’t, as well as how the promises can build a sustainable infrastructure.

“Our bottom line for the campaign is we want everyone to go beyond high school,” Kanter said, “Whether it’s career training at a community college or a four-year degree, or even an adult ed program that will then get you in that ladder to advance, that’s what this campaign is dedicated to do. And if we add the promise to this, it’s a commitment.”