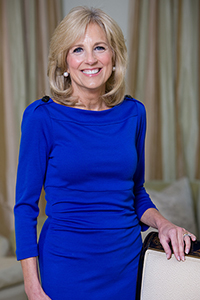 Dr. Jill Biden, a community college educator and the wife of Vice President Joe Biden, will be the featured speaker at an event celebrating the Community College Research Center’s 20th anniversary in November at Teachers College, Columbia University.

As Second Lady of the United States, Dr. Biden has been a leader of the White House’s efforts to improve college access and affordability. She hosted the first White House Summit on Community Colleges in 2010, and she talks about community colleges at stops around the country, from late-night talk shows to the Democratic National Convention. She calls them “one of America’s best-kept secrets.”

“We’re honored to have such a forceful and effective advocate for community colleges participate in our 20th-anniversary celebrations,” said Thomas Bailey, the director of CCRC.

Dr. Biden also teaches English full-time at a community college in Virginia. She visited Teachers College in 2010 to address the convocation of doctoral candidates and receive the Medal for Distinguished Service, the college’s highest award.

CCRC’s anniversary celebration will take place on November 17, with Dr. Biden speaking at 7:00 p.m. She will be followed by a panel discussion on the future of community colleges that will include City University of New York Chancellor James Milliken and Spencer Foundation President Michael McPherson, who is co-chair of the American Academy of Arts & Sciences’ Commission on the Future of Undergraduate Education.

Since its founding in 1996, CCRC has become the leading independent authority on two-year colleges in the United States, conducting research that illuminates how community colleges function, how they are experienced by students, and how new strategies and innovations may serve to improve student learning and outcomes. CCRC’s work has helped shape the efforts of colleges and states as they strive to provide an excellent education to all students and prepare the workforce of tomorrow.