What Can Student Right-to-Know Graduation Rates Tell Us About Community College Performance? 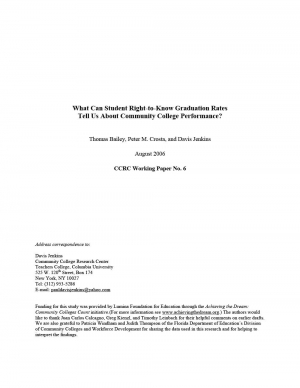 The authors then analyzed the usefulness of the SRK rate as a measure of relative institutional performance. Specifically, they considered whether using different measures of performance would result in substantially different rankings of Florida’s 28 community colleges. They found that the relative performance of the colleges did not change substantially as different students or outcomes were used, even after adjusting for student characteristics.

A brief of this paper, The Value of Student-Right-to-Know Data in Assessing Community College Performance, is available for download.