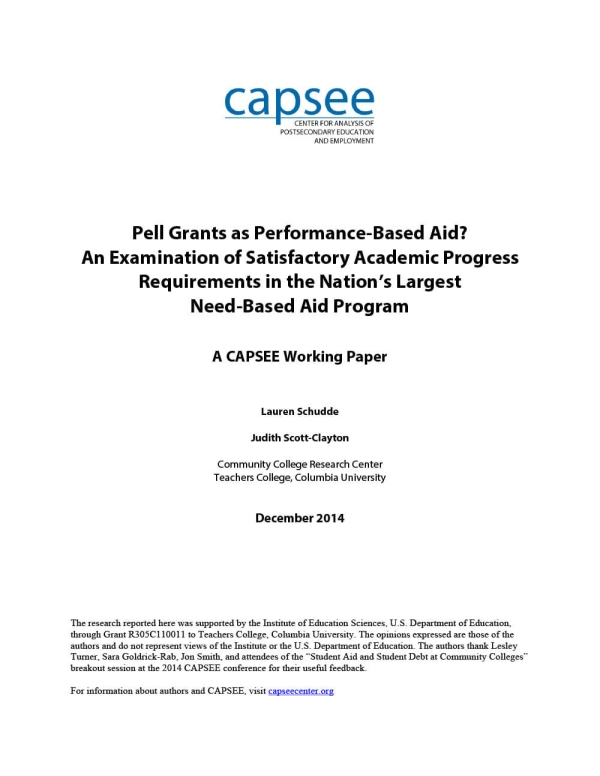 The Federal Pell Grant Program is the nation’s largest need-based grant program. While students’ initial eligibility for the Pell is based on financial need, renewal of the award is contingent on their making satisfactory academic progress (SAP)—meeting minimum academic standards similar to those proposed in models of performance-based scholarships. In this study, the authors employ regression discontinuity and difference-in-differences approaches to examine the magnitude of SAP failure and its effects.

The results suggest that a substantial portion of Pell recipients at community colleges are at risk for Pell ineligibility due to their failure to meet SAP grade point average (GPA) or credit completion requirements. Approximately a quarter fail to meet the GPA standard alone. When the credit completion requirement is taken into consideration, the first-year SAP failure rate approaches 40%. The preferred difference-in-differences estimates show mixed effects of SAP standards: Failing to meet the GPA requirement has a negative impact on persistence into the second year, but it may improve associate degree attainment and transfer among students who are not discouraged from reenrolling.

A version of this paper was published in Research in Higher Education with the title, "Pell Grants as Performance-Based Scholarships? An Examination of Satisfactory Academic Progress Requirements in the Nation's Largest Need-Based Aid Program."