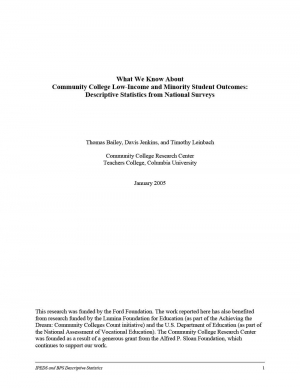 The IPEDS data provide longitudinal trend statistics of actual enrollments and degrees awarded by institution type and student characteristics between 1992 and 2002. From this, the authors describe the overall enrollment rates of racial/ethnic minorities and the total number of types of credentials earned by race/ethnicity, and they compare the rates across institution types to assess the relative achievement of students at community colleges. They also estimate the rate of degree attainment relative to the rate of enrollment by race/ethnicity at different types of institutions.

For national data on patterns of enrollment by student income and program type, the authors need to look at survey datasets, such as BPS:96/01. They use data from BPS:96/01 to describe enrollment patterns and completion rates by racial/ethnic minority and low-income student characteristics.

In contrast with IPEDS, BPS:96/01 provides achievement rates (degree and certificate attainment and transfer to baccalaureate institutions) for different types of students after six years, since beginning their postsecondary enrollment and across all institutions in which they enrolled during that time period.

These findings should be compared with those in the companion report, Community College Low-Income and Minority Student Completion Study: Descriptive Statistics From the 1992 High School Cohort, which provides enrollment and eight-year completion rates for the younger cohort of students who graduated high school in 1992.