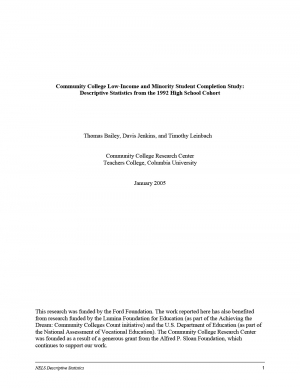 NELS:88 is a survey of a sample cohort of students, most of whom graduated high school in spring 1992. This report provides a detailed statistical analysis of the cohort's enrollment in and completion of higher education over the eight-year period from 1992 through 2000, with emphasis on the access and attainment of low-income and racial/ethnic minority students.

The majority of these students entered higher education in the 1992–93 school year or shortly thereafter. Therefore, NELS:88 represents a sample of young postsecondary students, much like the imagined "traditional" undergraduate student.

The report includes detailed charts showing rates of enrollment and completion of various outcomes for students by race/ethnicity, income level, parents' highest level of education, and initial type of institution attended. The authors highlight students who began in community colleges and compare their enrollment and completion rates with those of students at other types of institutions. The findings in this report should be compared to those in the companion report, What We Know About Community College Low-Income and Minority Student Outcomes.