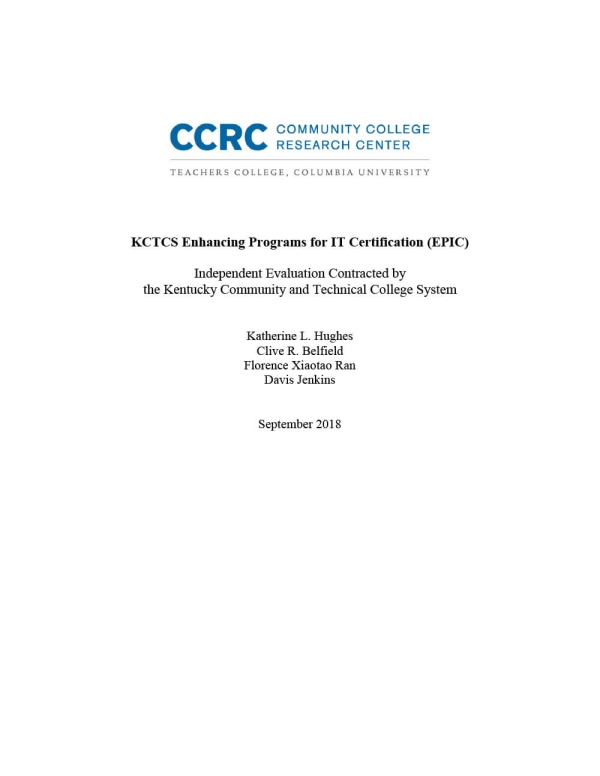 As technology and the labor market continue to evolve, community colleges face the crucial challenge of preparing students for contemporary high-skill, high-wage jobs. In an effort to spur the development of new programs that effectively train students for today’s dynamic workforce, the U.S. Department of Labor gave a consortium of six Kentucky community colleges a four-year, $10 million grant in October 2014. The grant money supported Enhancing Programs for IT Certification (EPIC), an online, competency-based curriculum that expands access to computer and medical information technology credentialing programs.

This report describes researchers’ qualitative analysis of EPIC and evaluates the program’s implementation and outcomes. The authors found that the program was implemented mostly as planned; by the end of the grant period, it had produced more courses and credentials than initially proposed.

The report also recounts challenges researchers faced in evaluating the impact of EPIC on students, due in part to the small sample of students who took at least two program courses and the short time span of this work. Regarding course grades, the authors found that while EPIC students did not underperform in comparison to their peers, they were unable to draw any strong conclusions from their analyses. The report concludes with suggestions for the field of online competency-based education and posits questions for future research.