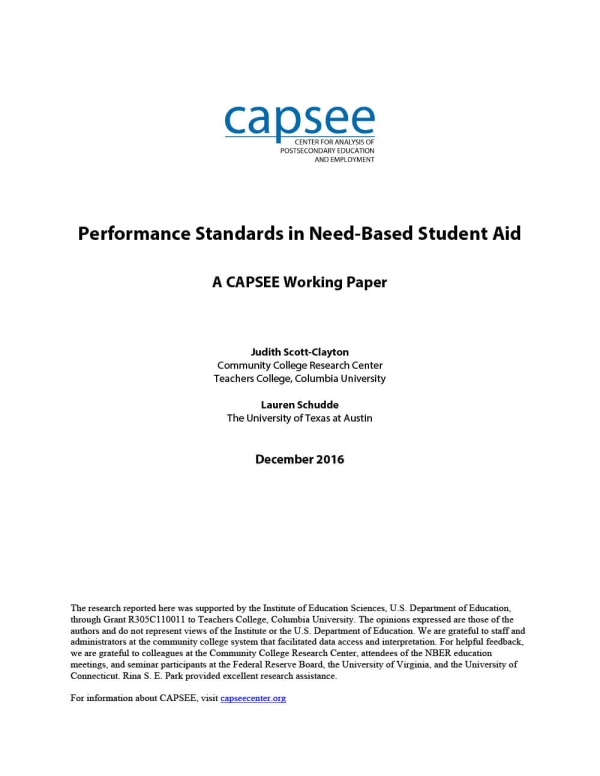 College attendance is a risky investment. But students may not recognize when they are at risk for failure, and financial aid introduces the possibility for moral hazard. Academic performance standards can serve three roles in this context: signaling expectations for success, providing incentives for increased student effort, and limiting financial losses. Such standards have existed in federal need-based aid programs for nearly 40 years in the form of Satisfactory Academic Progress (SAP) requirements, yet have received virtually no academic attention.

In this paper, the authors sketch a simple model to illustrate not only student responses to standards but also the tradeoffs faced by a social planner weighing whether to set performance standards in the context of need-based aid. The authors then use regression discontinuity and difference-in-difference designs to examine the consequences of SAP failure. In line with theoretical predictions, they find heterogeneous effects in the short term, with negative impacts on persistence but positive effects on grades for students who remain enrolled. After three years, the negative effects appear to dominate. Effects on credits attempted are 2–3 times as large as effects on credits earned, suggesting that standards increase the efficiency of aid expenditures. But it also appears to exacerbate inequality in higher education by pushing out low-performing low-income students faster than their equally low-performing, but higher-income peers.

Note: A similar version of this paper was released as an NBER working paper in October 2016.

A version of this paper appears in the Journal of Human Resources with the title "The Consequences of Performance Standards in Need-Based Aid: Evidence From Community Colleges."