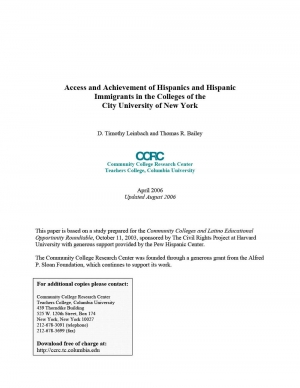 The research described in this report uses student enrollment, credit accumulation, and outcome attainment data to assess the extent to which CUNY provides access to postsecondary educational opportunity and achievement for these students.

Relative to their proportions in the city, Hispanics at CUNY are overrepresented by native-born students and underrepresented by immigrants. Hispanic attainment at CUNY is less than that of other populations, with the contrast between Hispanic and other immigrants greatest.

Related project(s): Minority and Immigrant Access and Achievement at CUNY