Using Technology to Redesign College Advising and Student Support: Findings and Lessons From Three Colleges' Efforts to Build on the iPASS Initiative 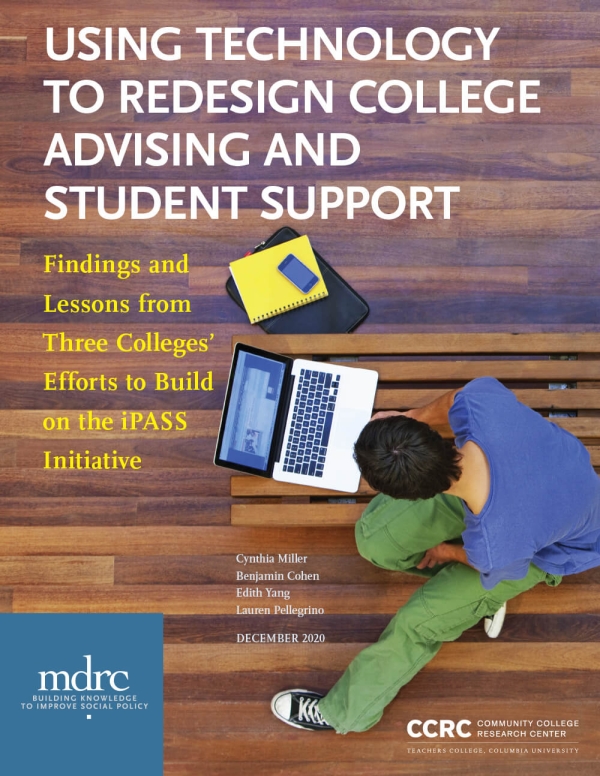 Integrated Planning and Advising for Student Success (iPASS) is an initiative designed to help colleges redesign advising practices using technology. Its goal is to use technology to support reforms aimed at improving communication and outreach to students, identifying and supporting struggling students, increasing the number and quality of advising sessions, and to ultimately improve students’ short- and long-term academic outcomes.

To study how technology can support advising redesign, MDRC and CCRC partnered with three institutions already implementing iPASS that wanted to enhance their existing advising practices, including their standard iPASS services: California State University, Fresno; Montgomery County Community College in Pennsylvania; and the University of North Carolina at Charlotte. In general, the colleges focused their enhancements on three areas: expanding informational messages to students, identifying and supporting students who are struggling, and redesigning advising sessions. The study used a randomized controlled trial design, assigning students at random to a group eligible to receive the enhanced iPASS services for two semesters, or to a group eligible to receive the colleges’ standard services, including standard iPASS. Thus, the study is not a test of iPASS, but a test of enhanced advising relative to standard practice under previous iPASS activities.

This final report from the project, which began in 2016, summarizes the program’s implementation and its effects on students’ academic outcomes for four semesters after study entry. The enhancements led to a small difference in the student experience; the colleges saw an increase in communication with students; a small increase in the number of meetings between students and advisers; and, at two of the three colleges, an increase in the proportion of students who, along with their advisers, received early alerts if the student was struggling in a given course. However, the updated impact findings show the enhancements did not have positive effects on academic outcomes. Additionally, the enhancements caused a small reduction in credits earned at one college, most likely because some students could not register for the next semester until they had attended mandatory advising sessions.

Mounting evidence from the study of education reforms suggests improving students’ academic outcomes requires more substantial changes to their college experiences. Reflecting a tension between scale and intensity, the study colleges managed to bring their iPASS work to more students, but the enhancements were not intense enough to create a substantial difference in students’ experiences. Adopting new technology and using it to redesign advising is an iterative process, and it takes time. This effort should be viewed as one step in the process of achieving broader change. The findings from the project may serve as a useful guide to colleges as they move forward.