Should Student Employment Be Subsidized? Conditional Counterfactuals and the Outcomes of Work-Study Participation 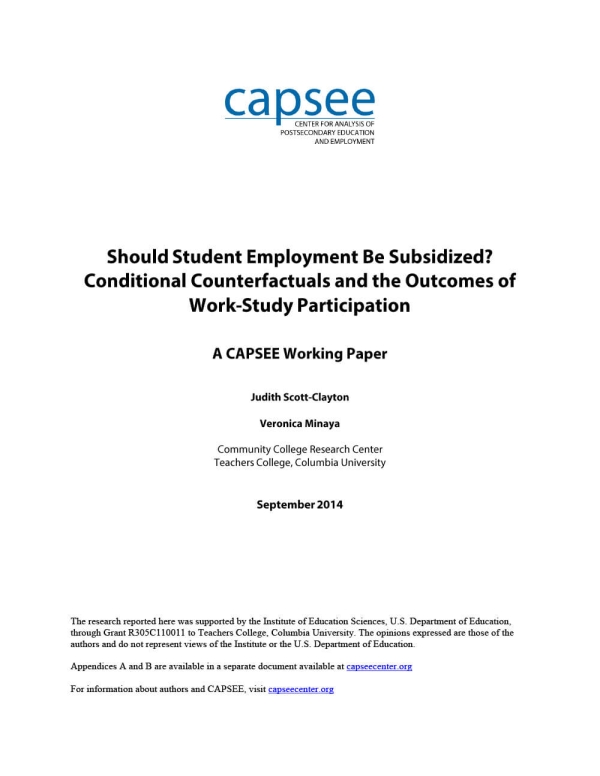 Student employment subsidies are one of the largest types of federal employment subsidies and one of the oldest forms of student aid. Yet it is unclear whether they help or harm students’ long-term outcomes. In this CAPSEE working paper, the authors present a framework that decomposes overall effects into a weighted average of effects for marginal and inframarginal workers. They then use an application of propensity scores, which they call conditional-counterfactual matching, in which they estimate the overall impact and the impact under two distinct counterfactuals: working at an unsubsidized job or not working at all. Finally, the authors estimate the effects of the largest student employment subsidy program—Federal Work-Study (FWS)—for a broad range of participants and outcomes.

The results suggest that about half of FWS participants are inframarginal workers, for whom FWS reduces hours worked and improves academic outcomes but has little impact on future employment. For students who would not have worked otherwise, the pattern of effects reverses. With the exception of first-year GPA, there is scant evidence of negative effects of FWS for any outcome or subgroup. However, positive effects are largest for lower-income and lower-SAT subgroups, suggesting there may be gains to improved targeting of funds.

A version of this paper appears in the Economics of Education Review, vol. 52.