The Fine Print on Free College: Who Benefits From New York’s Excelsior Scholarship? 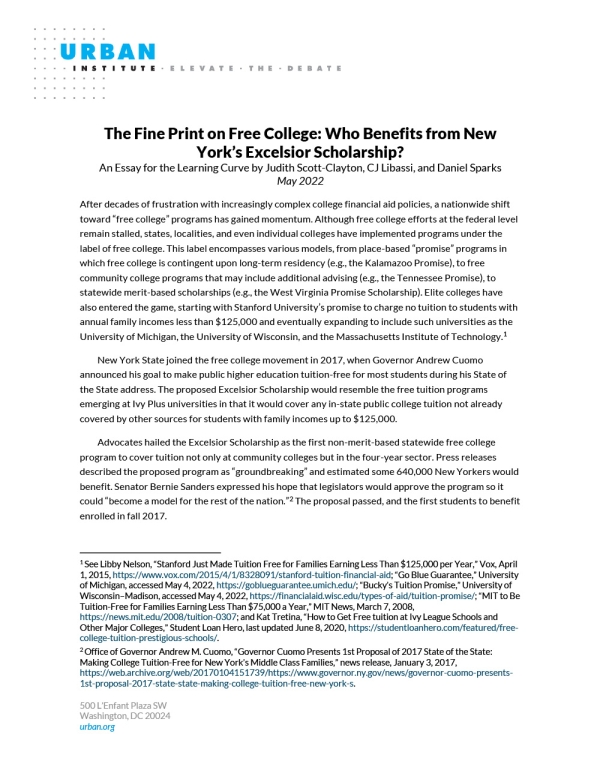 When it was proposed, advocates hailed the Excelsior Scholarship as the first non-merit-based statewide free college program to cover tuition not only at community colleges but in the four-year sector. Press releases described it as “groundbreaking” and estimated that some 640,000 New Yorkers would benefit. The proposal passed, and the first students to receive awards enrolled in fall 2017. In this essay for the Urban Institute, the authors assess the distribution of benefits, in terms of who qualifies for, receives, and renews the Excelsior Scholarship. The authors focus on students enrolled in community colleges and senior (four-year) colleges of the City University of New York (CUNY).

They find that middle- and upper-income students are most likely to benefit from the scholarship program, largely because of the eligibility formula’s last-dollar nature; most middle- and low-income students already have their tuition covered by other aid. This is not the whole story, however. Even among students who appear eligible for substantial awards, initial program take-up is low. Ultimately, only 5% of first-time, first-year students at CUNY receive an award, and only about half of these students renewed the scholarship for a second year. Based on evidence from other financial aid programs, the authors hypothesize that the application process and complex contracts students must sign may impede access to benefits.

Note that in addition to the online executive summary, the full essay is available for download.