What Do Students Think of Guided Pathways? 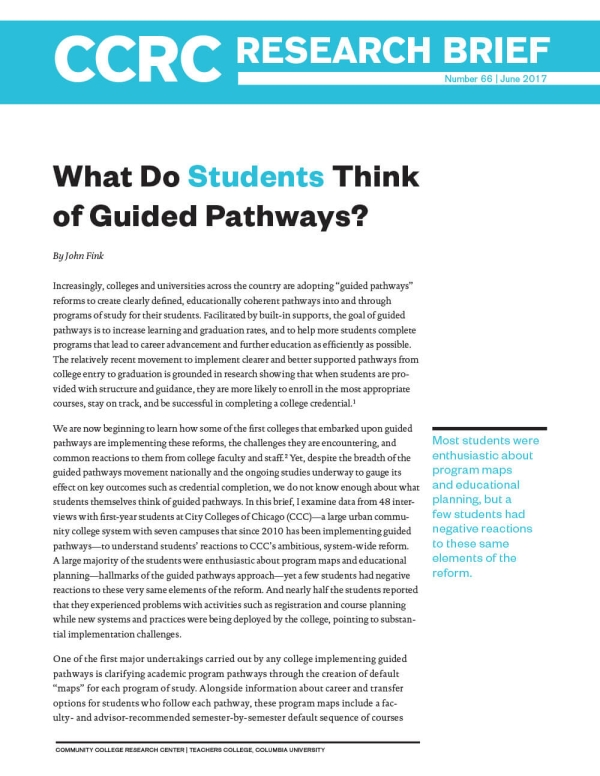 Colleges across the country are adopting guided pathways reforms to create clearly defined, educationally coherent pathways into and through programs of study for their students. Facilitated by built-in supports, the goal of guided pathways is to increase learning and graduation rates, and to help more students complete programs that lead to career advancement and further education as efficiently as possible. Yet, despite the breadth of the guided pathways movement and the ongoing studies underway to gauge its effect on key outcomes such as credential completion, we do not know enough about what students themselves think of guided pathways.

The author of this brief examines data from 48 interviews with first-year students at City Colleges of Chicago (CCC)—a large urban community college system with seven campuses that since 2010 has been implementing guided pathways—to understand students’ reactions to CCC’s ambitious, system-wide reform. A large majority of the students were enthusiastic about program maps and educational planning—hallmarks of the guided pathways approach—yet a few students had negative reactions to these very same elements of the reform. And nearly half the students reported that they experienced problems with activities such as registration and course planning while new systems and practices were being deployed by the college, pointing to substantial implementation challenges.